Wow. It has been a while since I last wrote anything for this journal. We all know what a turbulent 18 months it has been, so I wont say too much about it other than a lot has changed. I now no longer work in gyms; I work behind a computer screen, although hopefully not for too much longer. Still delivering personal training and S&C sessions but in a totally different way. It did take some getting used to and I still tinker with my set up, but it has allowed me to be far more efficient with my time and flexible with my location. I will take this opportunity to thank all my clients and athletes for embracing the change and adapting with me. THANK YOU, and to thank Julia for her patience and support I am not always the easiest person! 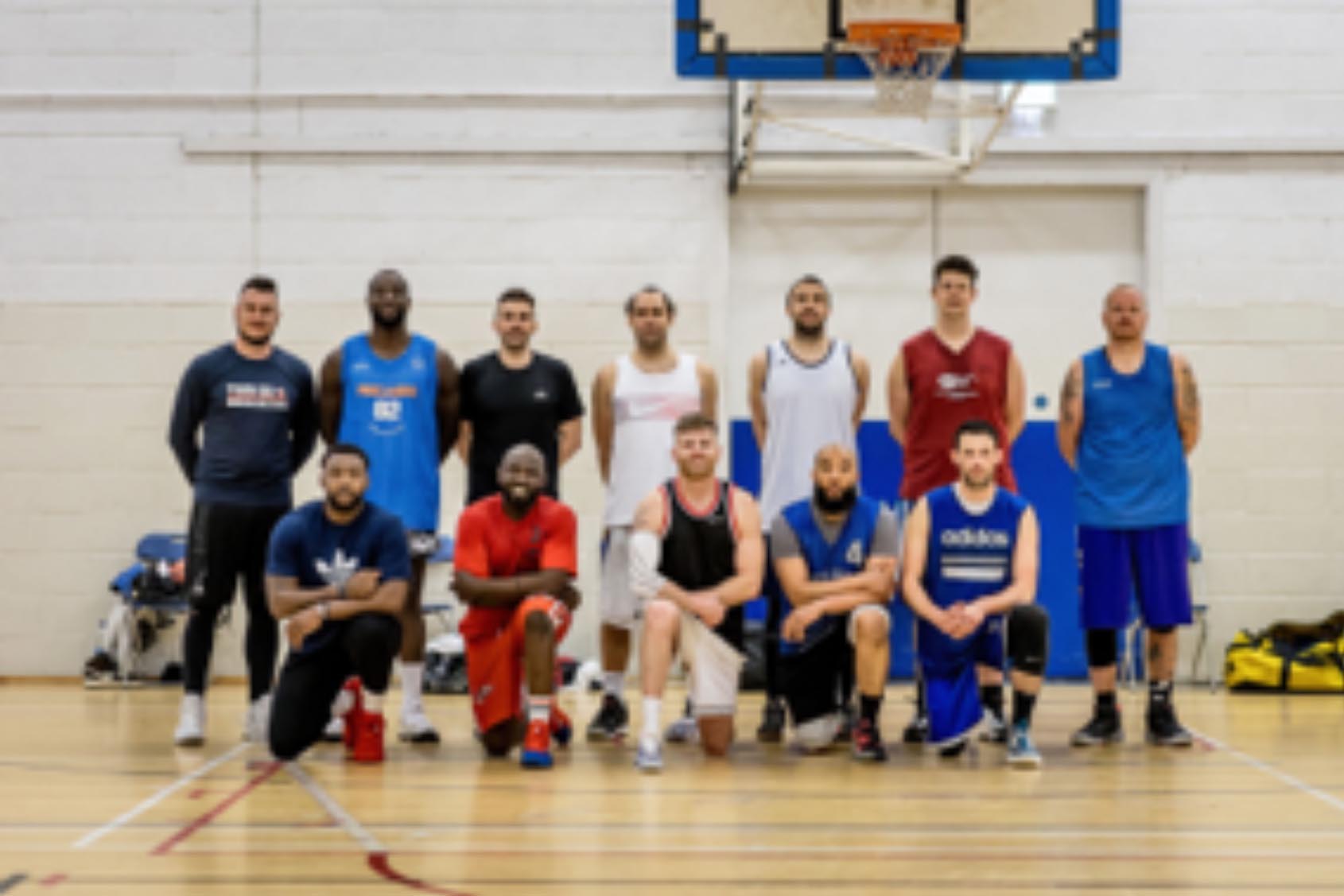 My main reason for writing again was to talk about last weekend (24/25 April 2021), the first of the eagerly anticipated Team GB Maxibasketball age group training weekends. Team GB Maxibasketball falls under the Team GB elite status talent pathway, allowing players to represent GB at 35+, 40+, and upward. I had originally stated my intention to tryout last Autumn, and apart from a Sunday session in October held at Brighton University this was the first time we were able to attend a facility and train/tryout. Since I signed up I have spent as much time on the outdoor courts as I can, 4/5 a week in all types of weather. Tracking (almost) all of my shots and keeping stats on my computer, (closing in on 40000 now). Keeping a good fitness level is part of my job, but with this opportunity on the horizon it has been relatively easy to stay motivated over the last 6-months, for that, and the GB Maxibasketball S&C group chat, I am grateful for the motivation, it could been easy to sit around and get into even more Netflix box sets.

The logistics of organising 75 players, coaches and medical staff under Covid conditions must have been a massive undertaking, and all credit goes to Sadie Mason MBE and Emma Parslow for doing so. Full medial screening, Covid testing playing histories, fitness tests all had to be completed before turning up in Sheffield. Sadie and Emma had recruited a quite exceptional coaching roster, with Jesse Sazant being appointed the program coordinator for the Men, I remember playing for London Towers against Jesse’s East Kent teams almost 20 years ago. I have since found out more about his coaching background and his coaching experience in Canada, and I am simply delighted to be involved in a program headed by him, however long it may or may not last. Jesse was joined by former BBL Manchester Giants coach Danny Byrne, Richard Parker of Birmingham Bullets fame, former Italian junior national team coach Riccardo Raggi, and the coaching talents of Brian Deacon, Karl Buitendam, Mike Martin (a former teammate of mine) and Tom Griffiths.

Mark Dayson, a veteran of international basketball, headed up the 6 person medical team, he did have his work cut out with the number of players, their age and the fact that many were stepping back on court for the first time since the Covid outbreak.

I was picked up in Northampton by James Acres, a former Towers teammate and long time friend and we drove up to Sheffield on Friday evening, straight to the hotel, a brief walk round Sheffield town centre, a Nandos deliveroo and an early night was all that was entertained. Saturday morning I woke early as I always do, I stuck on the Golden State Warriors game on my laptop to see what ridiculous shots Steph Curry was hitting the night before. I completed my mandatory Covid test, sent the result where it needed to go and chilled for an hour or so. At about 8am James knocked on my door and we headed out to the supermarket to get breakfast and stock up on high-energy foods. For anyone that is interested, Peanut Butter bagels, bananas and the SiS isotonic Gels got me through just fine (Ironman nutrition). Back to the room, I did 30 minutes yoga, then a blast on the massage gun and a nap before we headed to All Saints sport centre, it was only a mile or so from the hotel but retrospectively I am very glad James decided to drive.

Once we had arrived, temperatures were taken, we found a chair and left our belongings, as Sadie and Jesse greeted us, I will be honest I have no idea what either of them said, not that I wasn’t listening they had masks on and in the vast space of the double sports hall it was hard to hear.

The day would be split into 3 x 45 minute practice sessions, with 45 minutes between each one. Whilst you weren’t on the practice court you were next door, cooling down, then hydrating and eating (if you wished) and then warming up for the next session. The warm up and cool down was lead by Anthony Reed, a young S&C coach with tonnes of basketball experience, so everything was made to be fun and functional, and as a fitness professional myself I felt he did an excellent job.

Looking back, our first day blurred into one really, Coach Danny Byrne and Coach Tom Griffiths were assigned to the 35+ group. We started with some shooting drills, if I remember rightly I air-balled my first shot, I blame adrenaline and nervous energy, after which I settled down and don’t really remember missing again during the first practice session. We were soon placed in game specific 3v3 scenarios where we were told we had some limitations to stick to, for example, only non-ball screens allowed, the ball must enter the post on each possession etc. The coaches were looking to see how we as players adapted, how we spaced the court and made decisions on the fly. I felt quite comfortable doing this, as I have been playing at a relatively high level for a long time. As the 3 sessions on the first day developed so did the scenarios we were put into. UCLA cuts to start the offence, Dribble hand offs, diamond sets. There was plenty of rust within our group as one of the guys mentioned they had not played indoors since November 2019! But also there were some very talented players, and we soon began to learn each other strengths and weaknesses. I think I was identified as a shooter quite early on, therefore as the day progressed the space I was allowed by my opponents started to decrease. I had a couple of little private chats with the coaches and they encouraged me to be creative in the ways I seaked and created space for my teammates and myself. The final session of the day was predictably the toughest, fatigue began to set in and we were being challenged mentally as players. I struggled with my shot but tried to maintain my effort and let my fitness levels carry me through.

After a well needed cool down, James and I added another former Towers teammate Kola Odeniyi to the drive back to the hotel.

There were physio appointments for those that needed them available in the hotel, which I wasn’t expecting but equally was not surprised given how professional everything else had been throughout the weekend. James and I opted for Wagamamas this time, chilled for a while and then after some more stretching headed to bed at around 10.30. I didn’t have the best nights sleep, the adrenaline was flowing, hotel bed felt odd, the AC wasn’t right and I was thinking about various things.

I woke with my alarm at 7am, ate my porridge and had my green tea, then stretched some more. James had tweaked his ankle on the previous day so he was keen to head to the venue early to get some physio treatment before we began. It did the trick he was happily bouncing around before too long. The structure of the second day was the same as the first; we were assigned coaches Bryne, Parker and Raggi to work with and told we would be doing some full court work. My eyes lit up, after the first day I felt my fitness levels would be an advantage, and as a shooter it is always easier to find gaps and openings in transition than against a set defence. So I hit a few shots in this scenario and was also leading the break a few times. I will gladly admit I was breathing heavy but I didn’t really want finish this session.

The final session was back in the half court and worked on some more scenario work, spacing was key and as a shooter I liked this emphasis, it allowed me to seek gaps and create space for myself and others, by this time I began to feel I had really started to understand the other players and what the coaches were looking for, but before I knew it was time to finish. After a nice long cool down by the excellent Anthony and some closing comments from Jesse and Sadie. We were out of there! But not before I had headhunted coach Byrne, I felt as he was with us all weekend he would be a good person to ask for some feedback on how I had done and what to focus on before the next session. He was very complimentary and gave some great pointers to work on. I feel he and I could work together well IF things progress the way I want them too and I make the team, which is by no way a given. There are more players to be assessed by the coaches and a lot of basketball between now and the autumn when selection will be made. I think I have made an OK start, but all I can do is keep working hard and show what I can do.

I would like to say a massive thank you to Sadie and Emma for such a well-organised weekend, and to Jesse and all the coaches for giving us freedom to express ourselves. There were so many old friends and teammates present in Sheffield, as well as guys I played against at various points and of course plenty I hadn’t met before, all of which I got on with so well. Basketball has this strange quality in that it draws us all together in such a positive friendly manner and after the last 18 months it made me incredibly happy just to be invited and whatever the end outcome is for me personally, thank you basketball.